This is an account of my two month perfectionistic drive to write our 45 second intro music. 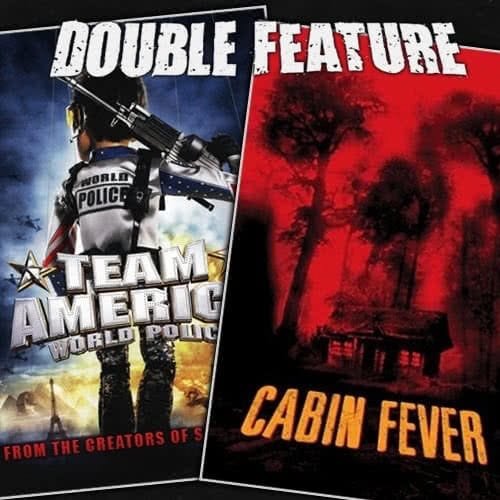 The show has been out for a few days now (you can get it for free on the Double Feature site), and after listening to it you’ve probably noticed that strange little mix of theme music. Writing and recording the theme is actually what held up the podcast for the last few months.

My original intention was to capitalize on the formula perfected by Rob Zombie. I knew the theme would only be about 30 seconds of music, so I listened to a lot of his stuff all day and wrote something that fit in when I got back home. Trying really hard not to strive for perfection, I threw it together quickly and after a few hours the basic idea was recorded. Easy. Done.

I was about ready to scrap it, but then I started working some samples into it. I keep a lot of movie and tv samples on my computer so I can pop them in and out of stuff I’m working on to get a feel for how a piece of dialogue might fit. The early versions of the theme had a sample from Carnivale – brother Justin talking about signs of the apocalypse. That seemed to be just what the theme needed. It toned down the ridiculous nu-metal sound and made it feel like it was about film again.

We didn’t want to use that particular sample for a few reasons. To start with we didn’t have rights to it…I think the bigger concern was that we wanted something all our own. We didn’t want people to trace back the source of our sample. A clip from Carnival at the beginning of every episode might be appropriate for a Carnivale podcast, but that isn’t the case here. We considered using samples from the different films we talk about in each episode, but that could have created an opportunity for spoilers and would have make the production of each show several hours longer. In the end I came up with this idea of having a made up sample that sounded like it was from a film.

I asked Michael to write a few lines and we’d pick one we liked to use. I really wanted to do the music myself (as I need all the practice I can get writing, recording and producing) but it’s his show too and this seemed like a great place for that collaboration. He came up with these fantastic lines. The only real idea I had there is that maybe they could sound like lines from exploitation films. As we were coming up with the look for the site and promo artwork, we always went back to exploitation cinema for inspiration. Doing so again with the music only seemed natural. He wrote the lines to sound somewhat sexual, somewhat sinister, and a few to sound like out of context they could even be referring to the podcast.

Rather than one long line, he also had this idea of doing a bunch of smaller samples. I was hesitant at first because I knew it would be a lot more work for me, but when he started showing them to me it seemed perfect. When there was a good selection to choose from, I brought in some friends of ours to record. I wrote a bit more about that whole process here. None of our friends are actors, voice or otherwise, so I just had a number of people record a multitude of takes for each line and then used that best from each session. In the end I used Melanie Boyna, Tia Battenberg, Samantha Gordon, Sarah Strand and Laura Angel – and I love every single sound they contributed.

After that it was a matter of rerecording and mixing over and over to center the focus around the girls rather than the trashy instrumentation. I played around with some production plugins to degrade the recordings and make them sound more like movies. Michael thinks the end product really gets back to my Rob Zombie template. When I listen to it, I hear a spot light on five different movies that don’t actually exist. Either way, I think it fits perfectly.

I released the recording under a Creative Commons license so people can take anything they want from it and use it in their own stuff. As I describe on the site, “content can be copied, distributed, adapted, tastelessly brutalized, and otherwise used without any permission – under the condition that it’s credited appropriately and linked to DoubleFeature.fm. This lone condition can be waived if absolutely necessary.” You can hear the full theme above, on our myspace, or at Last.fm.