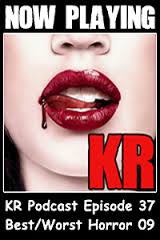 Butcher and special guest Eric Thirteen, from the Double Feature podcast, team up to discuss this years Best and Worst Horror Films of 2009. Other discussions include Hatchet 2 news, the upcoming DVD release of Cabin Fever 2 : Spring Fever and James Cameron’s Avatar. Hosts also give site announcements and dig through mail casket. It’s all hear and it’s only one click away!

I often talk on Double Feature about how we don’t do a review show. We’re strive to make our show less about us and more about the films we’re talking about. We’ve trained ourselves to suppress our opinions when they aren’t directly relevant to the notability of a film. Even after each show, I painstakingly edit out the terrible review jargon like that snuck it’s way into our conversation. Reviews just aren’t the niche we’re going for.

This week some friends of ours over at KillerReviews needed a last second co-host, so I have to admit that I was actually really excited to indulge. It was great to have a really opinionated conversation in that kind of forum. It’s a much different kind of show, it’s all about the personality of the hosts. They’re listens love to know what they think, and that works really well in the context of their overall site. After years of bottling up all these review-type-feels I dove head first into the most icon form of review – the top ten list.